Dr. Coleman continues to travel monthly to the University of Pittsburgh Medical Center (UPMC) to operated on soldiers with facial war injuries using Coleman Fat Grafts. The Sunday Pittsburgh Post-Gazette updated their previous report of the ongoing studies at UPMC. The following is an excerpt from the news article:

Sculpting with fat can restore faces (excerpt of original article) 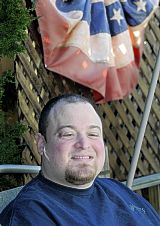 Robin Rombach/Post-Gazette Jeremy Feldbusch lost his sight after a piece of artillery shrapnel tore through his skull in Iraq in 2003. He underwent a new procedure that transferred fat from other parts of his body to fill in the side temple area of his head

Jeremy Feldbusch lost his sight after a piece of artillery shrapnel tore through his skull in Iraq in 2003. He underwent a new procedure that transferred fat from other parts of his body to fill in the side temple area of his head.

Jeremy Feldbusch can’t see the results of the special cosmetic surgery he recently got — but he’s pleased when people tell him what a good job the doctors did.

Mr. Feldbusch is blind because a piece of artillery shrapnel tore through his skull in Iraq in 2003. In January, UPMC surgeon J. Peter Rubin took fat from his abdomen and thighs and injected it into cavities that his war injuries had left on his face.

Dr. Rubin, recently named chief of the Division of Plastic and Reconstructive Surgery at UPMC, has received $4.5 million from the Department of Defense for his fat resculpting project, and so far has performed the surgery on 11 injured veterans.

Using techniques developed by New York plastic surgeon Sydney Coleman, who has assisted on the surgeries here, Dr. Rubin’s team removes fat cells from a patient’s body, centrifuges them to collect the most active cells, and injects theminto injury sites using tiny tubes that can be as narrow as an intravenous needle .Fat injections have been used in cosmetic surgery for years, but the problem has been that in many cases, the fat is absorbed by surrounding tissues and the work has to be done over.

Dr. Coleman’s centrifuge technique is designed to prevent that by concentrating the fat cells, which helps them to thrive and grow new blood vessels once they are injected.

In a broader sense, Dr. Rubin’s project is part of a fast-growing movement around the world to use fat stem cells to generate new tissues for all sorts of conditions, from breast reconstruction to growing new bone.

Most human tissues contain stem cells that can generate new cells of the same type to promote healing. Fat stem cells can not only grow new fat cells, but in the lab, they have been turned into bone, cartilage, skin and muscle.

In Japan, doctors have now used fat stem cell injections in hundreds of women for breast enlargements, and report that the women think the results feel and look much more natural than synthetic implants, he said.

UPMC’s Dr. Rubin is also working with fat stem cells for reconstruction in women who have had breast cancer. Because stem cells can promote tissue growth and new blood supply, there has been some concern that these injections might trigger a recurrence of the breast cancer, he said, “but our best evidence now shows if you have dormant cancer cells present, they are not likely to be reactivated by fat stem cells.”

While some of the fat that Dr. Rubin injected into Mr. Feldbusch and the other injured soldiers consists of stem cells as well, the next step of his research will be to grow additional fat stem cells in the lab and “enrich” the mixture of fat cells that are put into the injury sites.

In some cases, they remain fat cells when they are put in the body, but can promote blood vessel growth and healing in other tissues, which has been shown in experimental work on heart disease patients. In other cases, they can morph into completely different kinds of tissue

And they have one other advantage, Dr. Gimble said: People are happy to donate them. “There is no other tissue that someone will actually pay their doctors to take out of them,” he said.

The first report in the Post-Gazette back in November 2010

Update on Coleman Fat Grafting to the Nose

The treatment of face and neck scars with structural fat grafting

Fat Injection: From Filling to Regeneration

In Chapters 17 & 18 of Dr. Coleman’s book Fat Injection: From Filling to Regeneration

Treatment of the aging hand with LipoStructure