Correction of Liposuction Deformities and Irregularities

The Beginning of LipoStructure

In the 1980’s, deformities and irregularities from liposuction were new problems that the world had never seen. During that time, no solution existed for treating these problems. Most authorities in plastic surgery felt that grafted fat did not last longer than injectable collagen. In 1986 soon after I started practicing in New York City, I began developing a new method of fat grafting to treat deformities after liposuction. The technique eventually became known as LipoStructure® or “structural fat grafting.”

To harvest fat for structural fat grafting I use a syringe connected to a blunt cannula that I invented. I also devised another much smaller blunt cannula to infiltrate the concentrated, purified fat into the irregularities. The fat is transplanted to maximize stability and give the newly placed fat access to a blood supply so that it can live and thereby potentially be a long-lasting correction.

Using this technique, I found that I could fill in areas where too much fat had been removed on thighs, hips, arms and abdomens. Immediately after the procedures, there was remarkable smoothing of the liposuction irregularities, and to my surprise, a big portion of the fat infiltrated remained. In fact, even my first patients had changes that now appear to be permanent. For over twenty years, I have used this technique to correct liposuction deformities in hundreds of patients, from subtle, barely perceptible problems to large irregularities. 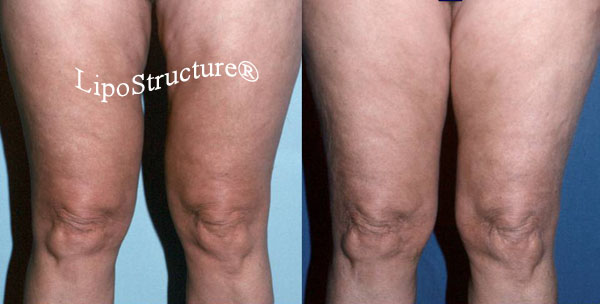 55 year old after excessive liposuction of her inner thighs (left) and 6 years after her second LipoStructure procedure (right). 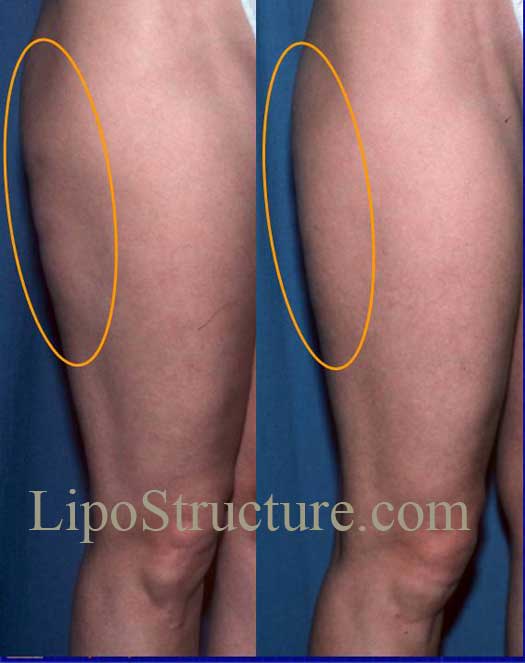 35 year old woman after outer thigh suctioning left her with minor irregularities (left). Two years after one infiltration of a total of of one ounce of refined fat was placed into the irregularities, significant smoothing of the area is noted.